Dangers of Codeine and Alcohol 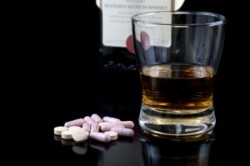 The dangers of codeine and alcohol can lead to a deadly consequence.

Codeine and alcohol can be a deadly combination producing serious side effects that can result in fatal consequences if left untreated. Codeine is a prescription narcotic that is generally prescribed for the treatment of moderate to severe pain and when taken correctly is not highly dangerous. Unfortunately, mixing codeine and alcohol together can lead to overdose, heart attack, or death.

The side effects of codeine include cognitive impairment and an inability to react quickly to instances of danger. Physical addiction can set in quickly when a user is taking codeine and as the addiction progresses, an increased risk of further complications also ensues. If a user becomes addicted to codeine and then drinks alcohol, the risk are raised significantly.

Generally, if you have been prescribed codeine for the relief of pain, you should have already talked with a doctor about the risks of taking codeine and alcohol. If you do drink alcohol, you should tell your doctor right away to be sure that he understands that you are not a good potential candidate for pain treatment using codeine. However, if you have been prescribed codeine and choose to drink alcohol, know that there are serious dangers which could occur including:

Various narcotics have this effect on users when they mix the drug with alcohol. For instance, hydrocodone, oxycodone, morphine and a number of opioid analgesics have the potential to cause serious damage if taken with alcohol or if alcohol is consumed while the user is under the influence.

What to do if You Suspect a Problem

If you have taken codeine and alcohol or if you believe that someone you know has taken codeine with alcohol, you should seek prompt medical treatment. While every case of taking codeine and alcohol will not end in fatal consequences, in the wrong situation at the wrong time, this combination of drugs and alcohol could prove to be fatal. Taking codeine and alcohol is highly dangerous and highly deadly. It is unsafe to use these substances together and such behavior should be avoided at all costs. If you suspect a problem, don’t hesitate to call 911 for emergency medical assistance. Waiting or choosing not to seek help when you know of a problem could prove to be a deadly decision.

If you are addicted to codeine or to alcohol, consider seeking professional help immediately. Sometimes, you have to take a medication such as codeine for the treatment of pain. This is acceptable behavior but if you are already an alcoholic, such behavior could be very dangerous. Likewise, if you are addicted to codeine and choose to drink alcohol, the consequences could be much the same. Getting help is your best chance at remaining safe and not suffering the potentially dangerous or deadly consequences of consuming codeine and alcohol together. There are a wide range of treatment programs available to help you overcome codeine addiction including inpatient treatment, outpatient treatment, medical detox and various types of support groups.