Doctors often use Tylenol 3 and other codeine products for childhood and adolescent surgery. Unfortunately this might be causing more problems than it helps. Codeine is an opiate. Despite being a mild opiate, it is still an opiate. Opiates are a highly addictive class of drugs that can open a gateway to later addiction.

Taking Codeine as a Child

Codeine turns to morphine when it is processed in the liver. This can not only result in an overdose death for children who process the codeine too quickly, it can very easily result in a mild addiction. Children who take a full complement of codeine pills after surgery sometimes have flu like symptoms after finishing a long prescription of the drug.

Some scientists speculate that this is not the flu but a form of withdrawal. People in opiate withdrawal often exhibit flu like symptoms. This early addiction however mild can lead to problems with addiction later in life. If you are experiencing difficulty with addiction due to codeine or any other drug call 800-774-6145 (Who Answers?) . We can help.

How Codeine Acts on the Brain 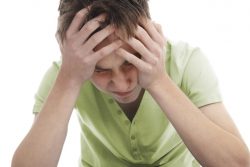 Children and adolescents may experience withdrawal symptoms after taking codeine.

According to the National Institute on Drug Abuse, codeine and other opioid drugs cause stimulation of the reward center of the brain. When this part of the brain is continually stimulated it causes physical changes in the receptors. As these changes occur, the brain loses its ability to feel pleasure naturally. So essentially, the drug hijacks the body and brain’s ability to experience normal pleasurable activities.

In both childhood and adolescence, the brain is still forming. When a child or adolescent takes codeine, it sometimes changes the way that the pathways for natural pleasure are formed. This can cause problems with addiction later in life. This often leads to the need for addiction treatment.

According to the National Library of Medicine, early substance use leads to a higher incident of addiction and dysfunction later on. There is a good chance that giving opiates such as codeine early in life leads to a vulnerability to addiction and the need for treatment later on.

The simple act of giving a child a full prescription of a seemingly innocuous pain killer such as codeine can change the way that the child thinks about drugs in later life. Some people believe that remember the euphoric feelings from early substance use, can lead to later substance abuse and addiction.

It is proven that person exposed to drugs such as opiates early in life often has problems with addiction to the point of needing treatment later in life.

Since you were exposed to codeine as a child, you are vulnerable to opiate and other addictions later on. If you find yourself struggling with addiction as an adult, there is help available. We can help you find the addiction treatment that you need to stop the struggle. All you have to do to find help is call 800-774-6145 (Who Answers?) .