Codeine exists as a powerful narcotic drug and an over-the-counter pain relief medication. This apparent versatility in usage purposes does not discount the potentially dangerous effects of codeine when used for nonmedical purposes.

Codeine’s classification as an opiate drug puts it in the same class of drugs as morphine and heroin. Though it’s less potent than morphine or heroin, it nonetheless carries the same potential for abuse, addiction and overdose.

Not unlike heroin overdose, a codeine overdose incident can be life threatening in the absence of immediate medical attention. As with most all opiate drugs, codeine’s effects on the body over time predispose users to codeine overdose episodes. In the case of someone just coming out of detox, codeine overdose risks can run especially high.

Codeine Effects on the Body

While not as powerful as morphine or heroin, codeine produces an analgesic effect that targets the body’s central nervous system (CNS) functions. When ingested, codeine slows down the CNS thereby depressing most all major systems in the body, according to Elmhurst College.

What makes codeine overdose such a real possibility has to do with how the brain develops an ongoing tolerance for codeine’s effects. As tolerance levels rise, users must take larger dosage amounts to experience the drug’s desired effects. With long-term use, dosage amounts can become large enough to shutdown major bodily systems. 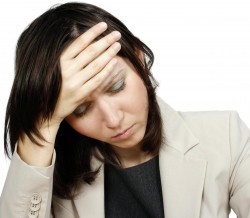 Feeling dizzy or having lapses in consciousness are signs of overdose.

Codeine overdose effects can take any number of forms depending on a person’s overall health condition, length of time using and dosage amount ingested. These effects can easily take on life-threatening proportions that require immediate medical attention.

While the brain’s tolerance levels for codeine continue to rise, the body’s overall tolerance level increases at a slower rate. This means a person’s cardiovascular and respiratory systems can easily be overwhelmed by a dosage that’s readily accepted by the brain.

According to the U. S. National Library of Medicine, the most common overdose effects take the form of:

People who metabolize codeine at a slow rate are at a higher risk of developing codeine side effects. When side effects start to surface, the potential for overdose increases accordingly.

Side effects to watch out for include: