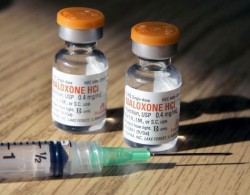 Naloxone is sometimes used to help people recover from an overdose on codeine.

While not as strong as heroin or morphine, large enough doses of codeine can bring similar “high” effects. Not surprisingly, codeine, heroin and morphine all belong to the same class of drugs known as opiates.

Codeine’s classification as a prescription medication likewise places it within the Schedule II class of narcotics drugs. These characteristics make codeine a dangerous recreational drug that carries a high potential for overdose.

A codeine overdose event can be life threatening, especially when needed medical care is lacking. Signs of overdose must be met with immediate medical attention. Whether on the spot or in the emergency room, codeine overdose treatment can be a traumatic experience to say the least.

Easy access to codeine-based drugs makes it that much easier for interested parties to abuse the drug. Intended as a prescription pain medication, taking large amounts of codeine can quickly shut down major, life-sustaining bodily functions. Though intended as a long-acting drug, snorting and injecting practices further increase the likelihood of an overdose event.

According to the U. S. National Library of Medicine, symptoms of codeine overdose include:

Once these symptoms appear, getting needed medical help is critical to surviving codeine overdose.

Whenever a codeine overdose occurs, a person has ingested more of the drug than the body can metabolize. Considering opiates in general slowdown digestive processes, it’s only a matter of time before avid codeine users experience an overdose event.

Codeine overdose treatments work to flush out all traces of the drug from the system while at the same time keeping the person alive. In cases where a person actually stops breathing, a drug known as naloxone is administered to reverse codeine’s effects. Naloxone essentially flushes all traces of codeine from the system. Because of the increasing rates of opiate overdose, emergency responders have started to carry naloxone doses as standard procedure.

Depending on the types of symptoms a person exhibits, emergency room procedures for treating codeine overdose include:

As codeine ingredients often exist alongside other medications like acetaminophen, ongoing treatment may be needed to address conditions resulting from added ingredients. Other co-existing problems with a person’s mental or physical health may also require further treatment.

In some cases, aftercare treatment for codeine overdose may also warrant a psychological evaluation to determine a person’s mental state when using drugs. People with existing physical and/or mental conditions may be advised to seek inpatient treatment to reduce the odds of another overdose episode from occurring.

Ultimately, once a person survives an overdose, the chance of overdosing in the near future increases substantially.