Codeine is a narcotic opioid pain reliever that is also used in the treatment of coughs and severe diarrhea and is one of the most commonly used medications in the world. Codeine produces drowsiness, relaxation, and in high amounts, euphoria for which it is commonly abused.

Codeine is normally taken orally because it is often combined with other ingredients to promote or enhance its therapeutic effects. Taking these medications through alternative routes of administration is both unfeasible and fatally dangerous.

Codeine abuse can lead to physical dependency in a relatively short period of time and the user will suffer cravings and withdrawals symptoms that resemble the flu when they try to discontinue use. The more codeine is used, the more severe these withdrawals can be. 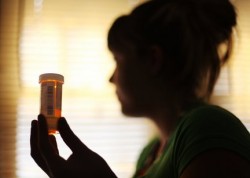 Codeine abuse changes the way the brain functions and addictive behaviors are reinforced every time codeine is used, leading to psychological dependence and compulsive use of the drug. Addiction requires treatment that focuses on reconditioning the brain to a more normal state without the use of codeine along with counseling and behavioral therapies to help the addict maintain abstinence and prevent relapse.

Respiratory depression is the primary risk for codeine abuse along with decreased blood pressure and heart rate. Codeine depresses the central nervous system (CNS) which affects every other system in the body and abuse can lead to a number of harmful conditions. If codeine with acetaminophen is abused in high amounts it can cause acetaminophen toxicity, liver, and kidney damage. Many drugs interact with codeine and can be dangerous as well as mixing codeine with alcohol.

Psychological issues often accompany codeine addictions because of the continuous disruptions to the neurological functioning within the brain and central nervous system. Addicts often suffer from anxiety, depression, insomnia, aggression, or other adverse mental health symptoms when they abuse codeine.

Abusers may enhance the effects of codeine by combining it with alcohol or other drugs which can be fatal. Common causes of codeine overdose involve respiratory or cardiac problems leading to death.

Codeine abuse of cough syrups is an alarming trend and popular brands contain antihistamines, such as promethazine, which are also CNS depressants. Combining these cough syrups with alcohol, also a CNS depressant increases the risk of overdose exponentially.

Codeine converts to morphine when it is metabolized in the liver and this rate may be much higher in some individuals which can cause overdose although the dose is considered normal for others.