Codeine cough syrups are prepared with codeine (an opioid cough suppressant) and other ingredients such as guaifenesin (an expectorant) or promethazine (an antihistamine) w/codeine in generic brands. An alarming trend, although not new, is the casual and recreational abuse of codeine cough syrups mixed with alcohol or sodas known as “sippin on syrup”.

Promethazine and codeine cough syrup combinations are particularly desirable to abusers because the sedative and tranquil effects are increased. Abusers commonly mix these codeine cough syrup medications with alcohol to intensify the relaxing sensations or use it in combination with marijuana to enhance the high. Marijuana joints are dipped in codeine cough syrups and widely known as “candy blunts” and sometimes, a little cocaine or crack is added and the joints are called “primo”.

“Sippin on syrup” has become a favorite pastime for abusers in night clubs, social settings, and for dealers of cocaine and crack on the street who avoid using their stimulant drug supplies while their customers use the “syrups” to calm down or ameliorate effects such as paranoia. According to a study by the Texas Commission on Alcohol and Drug Abuse (TCADA), “Many participants reported that codeine cough syrup was the preferred drug of crack dealers in their twenties. Although reasons reported for this included prestige and assumed preference for depressants, the most frequently occurring rationale was; “It’s good business. You don’t want to be using what you’re selling.”

According to the DEA, “cough preparations containing not more than 200 milligrams of codeine per 100 milliliters or per 100 grams” are Schedule V substances under the Controlled Substances Act (CSA) are more easily obtainable for abuse than many other prescription drugs. Schedule V substances under the CSA have a lower potential for abuse than codeine products under the Schedules II or III and are generally consider some of the safest drugs to use. 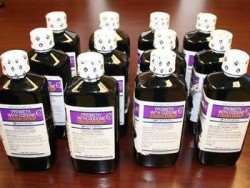 Codeine cough syrup can be addictive if not taken properly.

Like heroin and morphine, codeine is an opioid drug that can be addictive. Although in milligram to milligram comparisons with morphine, codeine has only 1/10 the analgesic potency, it converts back to morphine during metabolism at varying rates in different individuals. This means, that the codeine effects for one person may be accentuated over the effects to another person and that sufficient amounts of codeine can have the same potential effects and consequences as morphine, including addiction.

Repeat use of codeine cough syrups changes brain anatomy and functions that make quitting difficult, including withdrawals when the person attempts to cease use. As these changes occur, according to the Scripps Research Institute,” Collapsing the cycles of impulsivity and compulsivity yields a composite addiction cycle comprising three stages–preoccupation/anticipation, binge/intoxication, and withdrawal/negative affect–in which impulsivity often dominates at the early stages and compulsivity dominates at terminal stages.”

Uncontrollable use, cravings, withdrawals, and relapse can become so commonplace in the addict’s life, that even the worst consequences that occur are not enough to get them to stop using.

The impulse to use codeine cough syrup extends from the pleasing effects the person gets while intoxicated, but, once they reach the compulsive stage of addiction, they adjust their lives and behaviors around use of the drugs resulting in negative consequences.

Although the addict knows that their behaviors are wrong, they are unable to disengage from them and in order to resolve the internal conflicts they may alter their behaviors to defend their use. It isn’t uncommon for an addict to blame others as a reason for their use or to increase their use when facing threats to their codeine cough syrup abuse behaviors.

Hanging out with mutual codeine cough syrup abusers, delving into using the “syrups” in different ways, with different drugs or mixtures, and seeking ways to obtain the drug through illegitimate means may take precedence over looking for a job, going to school, or taking care of the family, children, legal, financial, or social obligations.

Codeine is a central nervous system depressant that slows respiration and heart rate. When combined with promethazine, both ingredients are central nervous system depressants increasing the risk of overdose or other serious health complications. Mixing alcohol with codeine cough syrup intensifies the depressing actions of the drug and is a “cocktail for death” even for those who are not naïve to opioids.

Taking too much codeine cough syrup may cause seizures, arrhythmia, severe respiratory depression leading to hypoxia or brain damage, stroke, heart attack, coma, and death. Organ damages can result from high toxicity levels as the codeine cough syrup ingredients accumulate in the blood and throughout the body.

Slang terms like “Drank”, “Purple Drank”, and “Lean” have been promoted in the rap scenes of modern cultures, but, many prominent musicians, themselves, have succumbed to the dangers of these drug practices, including overdose and death. According to the NIDA,” Abuse of prescription drugs is highest among young adults aged 18 to 25″ and “Among youth aged 12 to 17, 3.0 percent reported past-month nonmedical use of prescription medications.” One can see why the promotions of these drugs might be disturbing.