Effects Codeine Addiction Has on Your Health

Codeine addiction, over time, will negatively affect your health with effects that range from uncomfortable to deadly. 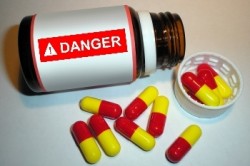 Codeine addiction can lead to dangerous situations such as overdose.

When a person overdoses on codeine, there is a possibility that that person may die. Because of this, codeine overdose is one of the most dangerous health effects possible for someone who is abusing the drug. According to the NIDA, “Codeine and other opioids present a high risk of fatal overdose due to their effect of depressing the central nervous system, which can slow or stop the heart and lungs.” This often results in the person’s death, especially if they are not rushed to the hospital and/or treated quickly enough.

If someone you know is addicted to codeine, it is important to know the symptoms of a codeine overdose. According to the NLM, someone who has overdosed on codeine will exhibit these symptoms:

When you see these symptoms in a codeine addict, call 911 immediately and get the person to the hospital. Their life may be in danger. The NIDA states, “Deaths from prescription opioid medications now outnumber overdose deaths from all other drugs (including cocaine and heroin).”

Codeine causes many other side effects which can be hazardous to your health, especially when the drug is abused. For someone who is addicted to codeine, these issues will be almost constant. Some of the common side effects caused by codeine abuse are:

Many of these effects will become more hazardous to your overall health over time. For example, vomiting and constipation will often cause other gastrointestinal problems for those who abuse codeine and their health will suffer for it.

It is also very dangerous to be under the influence of codeine and to be in a place where you are not safe. You also shouldn’t drive or do other things that require your concentration because codeine affects these areas. However, many people do so, get into car accidents, and experience other issues as a result.

A person’s mental health can also be affected by codeine addiction as well. According to the NIDA, “when taken in different quantities [than prescribed]…” prescription drugs like codeine “may affect the brain in ways very similar to illicit drugs.” Codeine addiction may cause diminished life satisfaction or the inability to find pleasure in anything except abusing the drug. Other issues also arise, such as:

Codeine abuse affects your physical and mental health and you also have a high risk of overdose which, from codeine, can be deadly. If you are abusing codeine and feel as if you cannot stop, don’t wait for these effects to occur. Seek treatment immediately and protect yourself from the health effects of codeine abuse and addiction.