People who use codeine on a regular basis often find themselves ingesting increasingly larger doses of the drug over time. Like all opiate-type drugs, the brain develops an ongoing tolerance of codeine’s effects, so more of the drug is needed to produce the desired “high” effects.

After a certain point, codeine in pill form can no longer produce a noticeable effect so users must find ways to intensify the effects of the drug. Snorting codeine greatly intensifies the drug’s effects and can satisfy a person’s dosage “requirement” up to a point. As brain tolerance levels continue to rise, snorting codeine will no longer satisfy a person’s craving.

Snorting codeine on a continuous basis greatly increases a person’s risk of liver damage, sinus infection and eventual overdose. The dangers of snorting codeine come into play over the course of ongoing drug use. 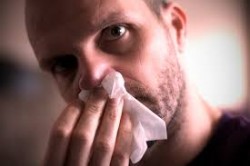 Chronic codeine use sets a vicious cycle of physical dependency and withdrawal effects in motion. As with all opiate-based drugs, brain cells not only grow more tolerant of codeine’s effects, but also become less sensitive in the process.

According to Columbia Health, this loss of sensitivity makes the brain even more dependent on codeine’s effects. Without needed amounts of the drug, a person will experience uncomfortable withdrawal effects, which become another driving force behind ongoing drug use. After a certain point, snorting codeine offers the only means for satisfying the brain’s tolerance requirements.

Most codeine-based products contain an added ingredient designed to intensity codeine’s effects. Depending on the drug’s treatment purpose, added ingredients may include one of the following –

When snorting codeine in large amounts, these added ingredients place a considerable strain on liver functions. Over time, liver cells start to die off, increasing a person’s risk of developing liver damage and eventually, liver disease.

Snorting codeine on a regular basis places users at high risk of sinus infections. As most every type of pill contains additive ingredients designed to help it hold its form or shape, these additives can become a source of irritation to nasal passageways. Likewise, any foreign materials entering the sinuses on a repeated basis pose a risk for infection, so codeine and its secondary ingredients can also trigger sinus infections.

The utensils used to snort codeine, such as cardboard and metal tubes, may also contain contaminants. Utensil surfaces can house bacteria or viral agents that gain easy access to the sinus cavities when snorting codeine. In the case of shared utensils, germs from each user can adhere to utensil surfaces placing everyone at risk of any number of bacterial and viral infections.

In general, the more intense the “high” the faster a person develops an addiction to a drug. Once addiction takes hold, ingesting extremely large amounts of a drug becomes commonplace as the brain’s tolerance levels have risen considerably.

Since snorting codeine already produces an intense “high,” users tend to increase their dosage amounts at a faster rate than when taking the drug in pill form. These conditions greatly increase the likelihood of overdose as brain and body processes become overloaded and eventually shutdown.