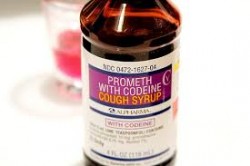 Side effects of codeine cough syrup include drowsiness and fatigue.

It has become a popular trend in recent years to abuse codeine cough syrup by mixing it with soda or alcohol. This combination, according to the University of Texas, is sometimes called lean, “for the side effect causing users to lose their coordination.” This drug has many side effect of its use and, unbeknownst to many of its users, can cause addiction.

The common side effects of codeine cough syrup addiction are similar to those caused regularly by codeine use. But, because the individual is abusing the drug, they will be much more intense.

Regular codeine side effects may include:

Constipation is usually the most complained of issue with the use or abuse of any opioid drug. Vomiting and drowsiness will likely occur when a person is intoxicated.

It may seem harmless to abuse codeine at first, but becoming addicted to the drug will mean that your experience with it is incredibly dangerous even though you will not be able to stop taking the drug. Codeine addiction can include these dangerous side effects

Possibility of doing something dangerous while intoxicated

Someone on codeine should not drive a car or do anything that requires intense concentration as they will be confused and drowsy.

Willingness to do anything to get more of the drug

This means lying, stealing, going to unsafe places, and putting themselves (and even someone else) in danger in order to get more codeine. This is because codeine cough syrup is “only available by prescription” (NIDA).

According to the NIDA, abuse of the drug with alcohol, which is incredibly common among codeine addicts, causes “dangerous slowing of [the] heart rate and breathing leading to coma or death.” This kind of overdose is even more likely when codeine and alcohol are mixed.

Becoming addicted to codeine cough syrup also means that your life will be affected, and not in a good way. Codeine addiction often causes

Families will often be torn apart, significant others will leave one another, and often it is very hard to repair the trust that was lost between two individuals at this time.

A person could lose their job because of their codeine cough syrup addiction. Actions that are common of addicts like abusing the drug on the job or no longer caring about work can cause the individual to get fired. Also a person’s grades can suffer tremendously, causing them to drop out or possibly lose a scholarship.

When people become addicted to a substance, they often become dissatisfied with their lives, depressed, and apathetic.

Codeine cough syrup, when abused chronically and in high doses, can cause addiction just like any other opioid drug. This is why it is important to know the side effects of addiction to this substance and to realize abusing it is no safer than abusing other opioid drugs.