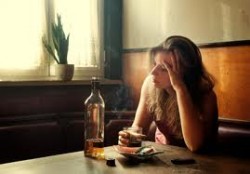 Codeine abuse can lead to depression and other health issues in the long run.

Codeine is a narcotic, an opiate-based drug used to relieve a patient’s moderate or mild pain. It is a prescription drug and can also be found in combination with other medications to reduce coughing. Codeine is a very beneficial medication for treating a variety of pain symptoms, but it can have many serious effects in the long term.

Codeine use affects a person by binding to receptors in the brain and blocking the sensation of pain. It also causes euphoria which becomes a pleasant and relaxing high. Long-term effects of codeine, however, can become concerning, especially those that affect the user’s mind and behavior. Long-term use of codeine can have these psychological effects:

Codeine use over time can cause depression. According to a medical study, “two thirds of the subjects had sought help for mental health problems, most often depression” as a result of long-term codeine use (NCBI).

Codeine addiction is a real threat for someone who has been using the drug long-term. Because codeine is habit-forming and causes dependence, people often build up a tolerance to the drug, needing to take more and more in order to feel its effects.

If the proper doses of codeine aren’t followed and the patient begins to use the drug more often, addiction has probably already begun. According to the DOJ, there is a strong chance that “use can create psychological dependence.” Many people who have used codeine for a long amount of time begin to feel as if they need the drug to function.

Codeine use also has strong physical effects. Because codeine slows down reactions in the body, use of the drug over a long period of time can cause major issues, such as:

This is one of the most serious side effects of long-term codeine use. It means that a person’s breathing becomes incredibly slow or labored to the point of danger. “Difficulty breathing” or “noisy or shallow breathing” can be signs of codeine-induced respiratory depression (NLM). If someone taking codeine begins to exhibit these signs, get them to a hospital immediately.

Although constipation isn’t always serious, it can cause issues after a long period of time. Codeine use can cause long-term constipation which may result in other complications.

Even if a person is using codeine correctly by the instructions of a doctor, there is still a chance of dependence, especially the longer codeine is taken. Withdrawal symptoms from codeine include: insomnia, runny nose, sweating, muscle and bone pain, vomiting, and diarrhea.

Codeine use also has a potential for overdose which becomes more of a risk when the user is addicted to the drug. Codeine overdose symptoms are:

If you are planning on using codeine for an extended period, you should know the potential side effects. Codeine can be very helpful for managing pain, but all medications have their additional symptoms. If you want to cut back or stop your codeine use completely, make sure to speak to your doctor first so that your use of the drug can be lessened as safely as possible.